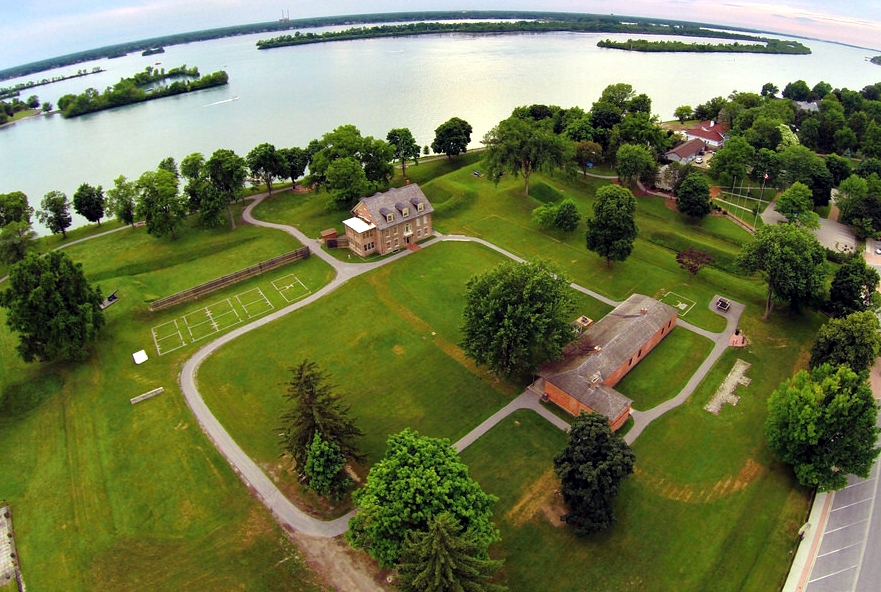 The establishment of mental hospitals in Upper Canada from the 1840s to the 1880s brought some relief to mentally ill people who had previously been placed in jails, almshouses, or who had been left to care for themselves. Throughout Upper Canada’s early history, many mentally ill people were left to wander at will, provided that they neither endangered nor were perceived to endanger people or property. Others, who were viewed as disruptive or who elicited fear in the populace, were placed in almshouses, poorhouses, jails, and penitentiaries. This rise of institutional psychiatry in the form of asylums, while it did bring some relief to mentally ill people, also caused a considerable amount of misery for a portion of the asylum residents.

What they shared was a sense -- among fellow citizens, families, doctors, judges, policemen, and in time social workers -- that they were, if not actually violent, then certainly aberrant. Their odd ways were often a burden to friends and loved ones, to others offputting at best: unconventional; unpredictable; unsettling. They were disturbing -- therefore "disturbed." And maybe dangerous.

The aberrances deemed most disturbing, even if not violent (most in fact not), were those seen linked to sex. Of women locked up at the Toronto Queen Street Asylum prior to 1900, a quarter were in for "female trouble" -- "childbirth, lactation, miscarriage, menstrual disorders, uterine disorders" and other natural conditions seen as "the predisposing cause of insanity."

Following are some excerpts from the historical research of Kathleen Kendall (School of Medicine, Southampton University).

....Criminal lunatics became recognized as a unique group only in the 19th century. Prior to this time, criminals, the insane and debtors were all confined together in jails. However, early Canadians soon found that jails were becoming overcrowded and were increasingly concerned about the changes associated with urbanization, industrialization, and immigration. In response to these social forces, reformers began to employ scientific methods, including classification, as a means of re-establishing order and control. The separation of criminals and lunatics was part of this endeavour, achieved through the creation of two institutions of great significance: the Kingston Penitentiary in 1835, and the temporary Lunatic Asylum at Toronto in 1841. A permanent asylum, the Provincial Lunatic Asylum was completed in 1851.

Criminal lunatics soon proved troublesome to both the penitentiary and the asylum. Because of their emotional and sometimes physical outbursts, they disrupted the disciplinary regime underlying the penitentiary. More importantly, however, criminal lunatics were a philosophical conundrum. They were considered a contradiction in terms “inasmuch as the word Criminal obviously implies a knowledge of evil, while the word Lunatic as evidently implies an utter absence of that knowledge [italics in original].” Female criminal lunatics were an even greater enigma regarding moral agency, since the sexual ideology at the time maintained that women were inherently virtuous and innocent. The fusion of insanity, criminality and femininity appeared incongruent. In transgressing the boundaries of classification, criminal lunatic women disrupted attempts to maintain order and control.

As categorical anomalies, female criminal lunatics fitted into neither the asylum nor the penitentiary. However, since this group contained elements of criminality and lunacy, they belonged in both institutions. Consequently, they were shuffled back and forth between institutions and were wanted by neither. The animosity and vitriol directed at criminal lunatics finally resulted in the establishment of a temporary criminal lunatic asylum within the penitentiary in 1855. In response to the “evils arising from the reception of insane criminals at the [Provincial Lunatic] Asylum,” Attorney General Sir John A. MacDonald recommended that the “portion of the Provincial Penitentiary…be fitted up for the reception of the criminal lunatics in the Asylum, now 21 in number, as well as for those at present confined in the several County Gaols of Upper Canada.” MacDonald also suggested that provision would be needed “for the separation of the sexes.” In his letter to one of the penitentiary inspectors, the warden echoed this last concern. “There must be a positive decision as to female convicts as they cannot be confined within the same prisons as the male lunatics, there not being any place for them.”

The issue was resolved by the inspector’s decision that “…after a very careful examination of the Penitentiary there is no possibility of making a proper place for female lunatics and would therefore recommend that none of this class be forwarded to this institution.” The success of the inspector’s decision is apparent in the warden’s smug reply: “… we are rid of the females which is quite satisfactory.” Consequently, when the Criminal Lunatic Asylum finally opened in June 1855, there were no females among its occupants. Female criminal lunatics remained in the Provincial Lunatic Asylum until their transfer to the horse stables at Rockwood in 1857. The Act creating the Criminal Lunatic Asylum at Rockwood stated that the following classes of people were to be admitted into it:

1.Convicts in the penitentiary becoming insane while under sentence there.

2.Certain classes of lunatics committed to jail as lunatics dangerous to be at large.

3.Persons charged with some offence of which they had been acquitted on the ground that they were insane at the time such offence was committed.

4.Persons indicted for any offence, and upon arraignment thereof found, by a jury especially impanelled for the purpose, to be insane.

Due to overcrowding at the "Provincial Lunatic Asylum", Toronto, another asylum was opened in 1859 in Amherstburg, Ontario, on the Detroit River, not far from Windsor. This location was chosen as it was no longer being used as a military fort by the British colonial authorities. It could also be set up as an asylum in relatively short time for the increasing numbers of people who were being confined from the southwestern part of the province. Though scarcely remembered now, the men and women who were confined in "Malden Lunatic Asylum" left behind physical evidence of their existence that deserves greater public recognition today.

As would occur elsewhere, when new asylums were opened in 19th century Ontario, the first inmates were insane asylum patients who toiled for no pay to help prepare the place for later occupation by more inmates. (During this same period, provincial prison inmates were paid for their labour, though only a pittance.)

Twenty male inmate labourers were transferred from the asylum in Toronto on July 14, 1859, to Amherstburg. Once there, they toiled to get the buildings and grounds ready for later transferrals of asylum patients from Toronto. By December 1859, 146 male and female insane asylum inmates were confined in this former military fort on the Detroit River.

During the eleven years of its operation, the "Malden Lunatic Asylum", was the site of an enormous amount of unpaid labour by male and female inmates. Their work ranged from cooking and washing to sewing and mending, to constructing and repairing buildings to making breakwalls along the river to prevent soil erosion, to even making wine from left over grapes in the mid-1860s.

To give an example of the immense amount of unpaid farm labour done by patients in this one, now forgotten asylum, the Annual Report for this institution for October 1868 to October 1869 states that inmate farm labourers worked the equivalent of 2000 days at 6 hours per day during the previous year. Reports during the 1860s reveal the enormous tally of farm and garden produce cultivated by asylum inmates on sixty acres of farm land attached to this asylum. For example, the report for 1861 mentions the cultivation of 11 tons of hays, 100 bushels of oats, 200 bushels of green corn, 2000 heads of lettuce, 1100 heads of cabbage and 900 bushels of potatoes, among other items. All of this work made the asylum completely self-sufficient in food and saved the provincial operators a great deal of money– due to the unpaid labour of Malden Asylum inmates.

There were 243 inmates in the Amherstburg asylum, nearly evenly divided between males and females, by the fall of 1869. The following year, they would be transferred to a new asylum in London, Ontario at which time Malden Asylum was closed.

Their labour, as well as their lives, need to be acknowledged at the present-day Fort Malden National Historic Site where there is no public display providing details about the asylum inmates who once lived, worked and died there. 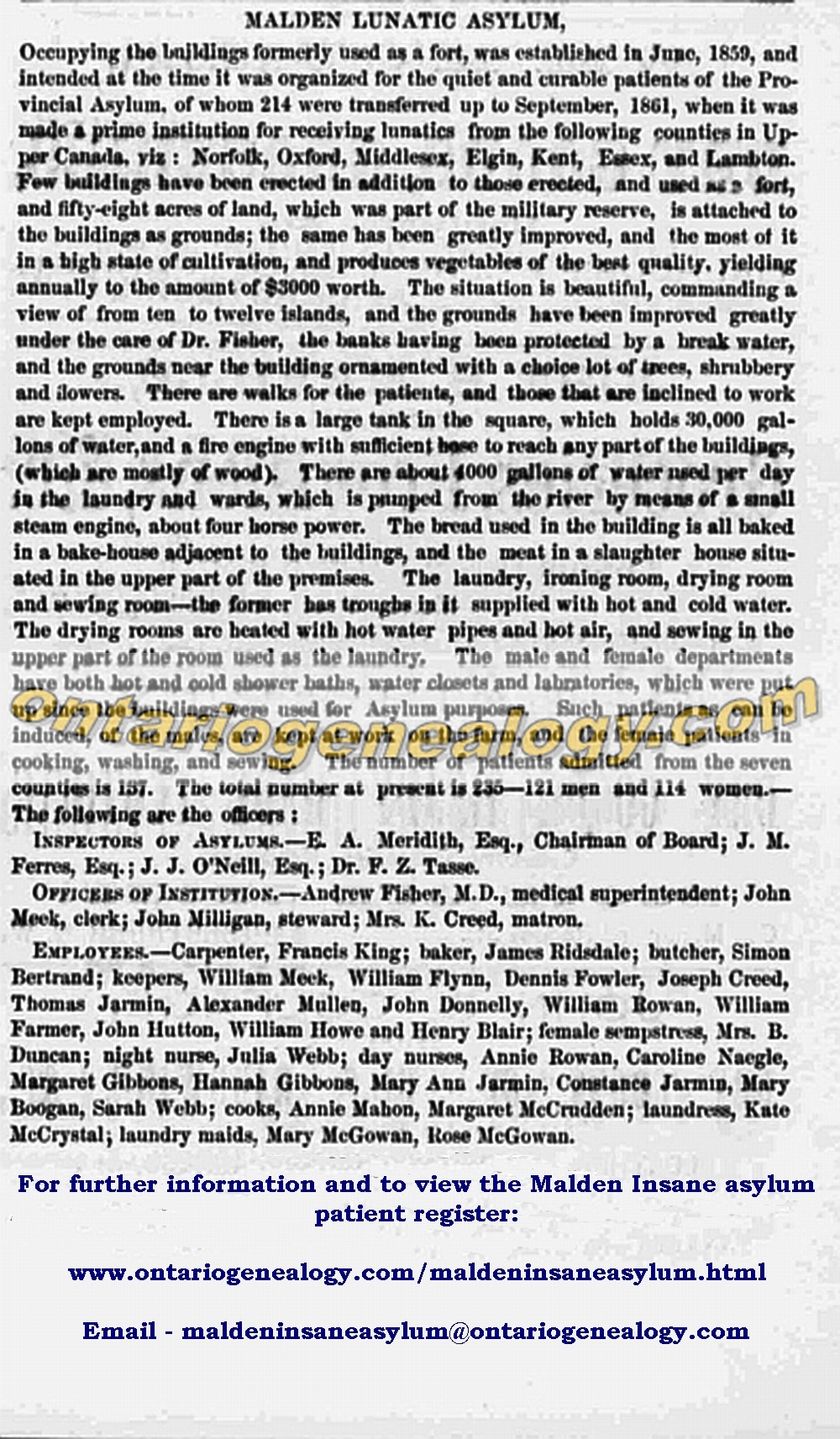 The following database has been constructed from records of the Malden Insane Asylum. Each record in my index consists of the name of the inmate, the home residence of the inmate (ie District,county,town), and the age of the resident.

The COMPLETE insane asylum records contain a wealth of information on your ancestor that will not be found in any other records available.

Data that may be included (* amount of info recorded varies from case to case) in the inmate files includes country of birth, previous place of abode, by whom supported (ie friends,province), sex, age, single or married, number of children, occupation, degree of education, religion, habits of life (ie. sober,sedate,intemperate), times admitted, date of admission, date of discharge (this often death date in asylum), time in asylum, age at first attack, number of previous attacks, duration of present attack, whether suicidal or dangerous, nature of crime (if convicted before admission), cause of disorder (ie. hereditary, life event), form of mental disorder, hallucinations, accompanying body disorder, results (ie. died, discharged), cause of death, general observations. Some of the records include detailed medical reports. Many of the inmates were repeat patients over the years.

Those researchers interested in using my very fast and convenient research services to obtain the COMPLETE insane asylum record, may contact

Those who wish to use these databases as guides in their own searches, are welcome to do so. * As far as locations are concerned, county, township, or town/village are recorded for many individuals. Many were listed as being from various gaols, but researchers should keep in mind that many of these individuals originally were from elsewhere in the province. For those individuals whose residences are not given, their location often can be identified by doing an online census search, ie. 1881, 1891 or 1901

Use links below for London Asylum, Toronto Asylum Databases, Hamilton Asylum, and the Kingston Insane Asylum

This web site is a copyright work. The reproduction, copying, downloading, storage, recording, broadcasting, retransmission and distribution of any part of these pages (including all text, compilations, graphics and source code) without the written permission of Michael Stephenson is strictly prohibited.