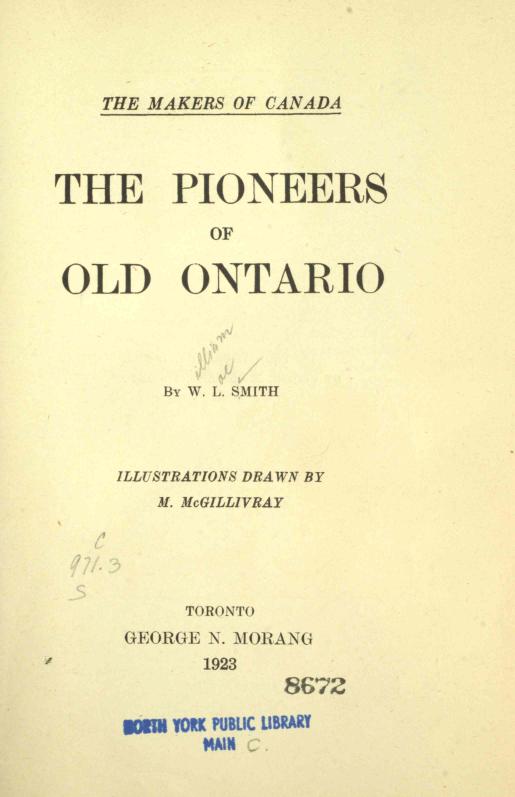 The following links are a preliminary list of Ontario History books, directories etc. that are entirely free to read online, or download to your home computer to use at your leisure. There are a number of companies out there who are attempting to have individuals purchase digitalized copies of these same books (and even individual chapters from these books) that are free at on-line libraries and other sites. Don't get suckered into buying this stuff... its free!! University of Toronto Robarts Library has done quite a bit, Google has done a lot, generally better images. I believe that most of these Ontario history books are in the public domain now, ie copyright free.

The story of the Counties of Ontario (1913) Emily P. Weaver

United Empire Loyalists of the County of Dundas, Ontario (1900?])

The centennial of the settlement of Upper Canada by the United Empire Loyalists, 1784-1884

Sketches illustrating the early settlement and history of Glengarry in Canada : relating principally to the revolutionary war of 1775-83, the war of 1812-14 and the rebellion of 1837-8, and the services of the King's Royal regiment of New York, the 84th or Royal Highland regiment, the Glengarry light infantry regiment, and the Glengarry militia (1893)

Shanty, forest and river life in the backwoods of Canada (1883)

The history of the county of Welland, Ontario, its past and present [microform] : containing a condensed history of Canada; a complete history of Welland county, its townships, towns, villages, schools, churches, societies, industries, statistics, etc.; portraits of some of its prominent men; description of its various historic and interesting localities; miscellaneous matter; biographies and histories of pioneer families, etc (1887)

The life and times of Joseph Gould. Struggles of the early Canadian settlers, settlement of Uxbridge, sketch of the history of the county of Ontario, the rebellion of 1837, parliamentary career, etc., etc. Reminiscences of sixty years of active political and municipal life (1887)

Historical sketches of the County of Elgin (1895)

Alphabet of first things in Canada

Commemorative biographical record of the county of York, Ontario : containing biographical sketches of prominent and representative citizens and many of the early settled families. -- (1907)

Boyd's combined business directory for 1875-6 [microform] : containing an alphabetical list of all the merchants, manufacturers, tradesmen, &c. of Montreal, Toronto, Hamilton, Ottawa, London & Kingston arranged under their proper headings, also, a complete appendix of the government historical sketch of each city, &c (1875)

Past years in Pickering : sketches of the history of the community (1911)

History of the settlement of Upper Canada, (Ontario) [microform] : with special reference to the Bay Quinté (1869)

History of the county of Lennox and Addington (1913)

The Society Blue Book of Toronto, Hamilton and London. A Social Directory 1910 (1910)

Ottawa, past and present, or, A brief account of the first opening up of the Ottawa country, and incidents in connection with the rise and progress of Ottawa city, and parts adjacent thereto [microform] (1871)

Illustrated historical atlas of the counties of Frontenac, Lennox and Addington, Ontario [microform] (1878)

History of the County of Middlesex, Canada : from the earliest time to the present, containing an authentic account of many important matters relating to the settlement, progress and general history of the county, and including a department devoted to the preservation of personal and private records, etc. ; illustrated (1889)

Geographical handbook of the county of Grey [microform] (1895)

Lovell's Canadian Dominion directory for 1871 [microform] : containing names of professional and business men, and other inhabitants, of the cities, towns and villages, throughout the provinces of Ontario, Quebec, Nova Scotia, New Brunswick, Newfoundland, and Prince Edward Island,...corrected to January, 1871 (1871)

Reminiscences of north Sydenham : a retrospective sketch of the villages of Leith and Annan, Grey County, Ontario (1924)

History of Leeds and Grenville Ontario, : from 1749 to 1879, with illustrations and biographical sketches of some of its prominent men and pioneers (1879)

The history of the county of Bruce and of the minor municipalities therein, Province of Ontario, Canada (1906)

Recollections and records of Toronto of old : with references to Brantford, Kingston and other Canadian towns (1914)

Commemorative biographical record of the county of Lambton, Ontario... : containing biographical sketches of prominent and representative citizens and many of the early settled families. -- (1906)